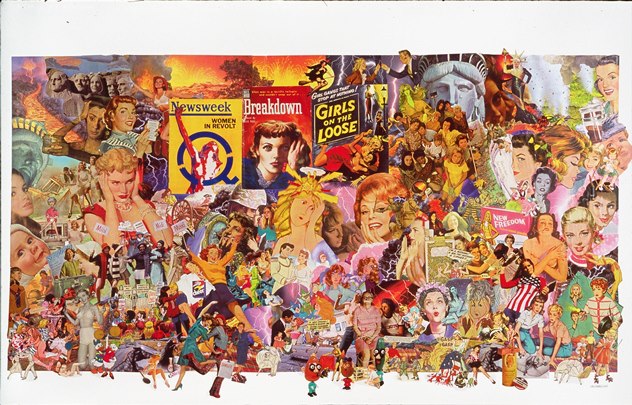 UniteWomen.org is pleased to announce the seventh of twelve featured artists in our online art show Women’s Rights – An Artist’s Perspective. A Storms Approaching by Sally Edelstein

As a storm approaches the Republican National Convention, women are already in the eye of the storm. Today women are being moved around like so pawns in a political game that seems to be played by men only.

This piece is a pastiche of postwar American imagery, a time when confining, colliding and conflicting images of media stereotypes of women littered the pop culture landscape that was erupting in a women’s liberation movement.

Like most Americans, I have consumed vast amounts of pop culture imagery, and fragments of these countless  mass media images remain imprinted in each of us. These media images are the sharpest illustrations not of reality, but of  domestic and national ideals, reinforcing  cultural, gender and racial stereotypes.

Using collage as a means of examining social fictions, the pieces are composed of hundreds of banal images appropriated from vintage ads, periodicals, children’s school books, comic books, pulp fiction and all sorts of ephemera, dissociating the images from their original use to better re-evaluate its’ original message.

This online exhibition is in support of UniteWomen.org and was featured on this website and currently on our Facebook page.

In addition to the online exhibit, there was a gallery exhibit held during November 2013.