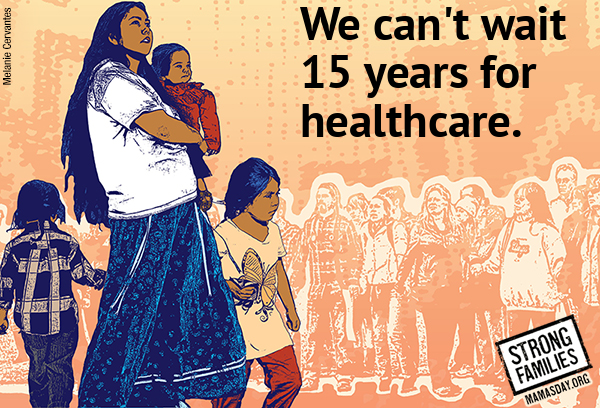 As many Americans prepare for the October 1st open enrollment in the Health Insurance Marketplace, options for health care coverage will become increasingly available. Those who do not currently have coverage, have been denied coverage or would like to have more choices are going to be given a new opportunity in terms of health care coverage.

These options are not the same for all living in America.

Legislation in many states is continuously introduced which restricts non-American citizens from accessing healthcare. Federal law creates numerous bans on federal health programs for immigrants. As the possibilities of the Affordable Care Act are constantly targeted by state policymakers, the potential to expand access to these women is being attacked. As all women living in poverty are marginalized in this health care system, female immigrants are often afflicted by this injustice on three levels: poverty, immigrant status and gender. If an immigrant lives in the United States for five years or less, they are denied access to Medicaid for basic public health services, including prenatal care. According to the National Latina Institute for Reproductive Health, “Under the immigration bill that just passed the Senate, many families would be forced to wait 15 years or longer before seeing a doctor.” For many, emergency services are the only option and often a last resort.

Female immigrants, mostly Latina, are a high risk group when it comes to access to health care services. According to a policy analysis by the Latina Institute, “Immigrant women are less likely to receive adequate reproductive health care, including cervical and breast cancer screening and treatment, family planning services, HIV/AIDS testing and treatment, accurate sex education and culturally and linguistically competent services.”

In addition to the lack of health care services available, these women are often working in environments which increase health risks. These women are tax payers who are often underpaid and lack basic worker’s rights. According an article on Dissent, stories of abuse and rape are all too often unreported out of fear while women who become pregnant from rape are left with little choices, if any, when it comes to reproductive health. Access to abortion and prenatal care are not options for these women for fear of being returned to the country they immigrated from or being arrested. According to Dissent, “Immigrant women in Texas tell us that accessing birth control, cervical cancer screenings, and other reproductive care is so difficult here in the United States, they’re forced to cross into Mexico in order to get the care they need,” says Kimberly Inez McGuire, Associate Director of Government Relations and Public Affairs at the National Latina Institute for Reproductive Health. “One woman told us about how she literally swam across the Rio Grande to get access to reproductive care.”

According to Dissent, “Pregnant farm workers are also extremely vulnerable to heat-related illnesses. A public outcry erupted in 2008 when a young pregnant migrant died after collapsing from heat exhaustion in a California vineyard… despite some recent state and federal efforts to revamp safety protections, regulations remain anemic, and brutal conditions in the fields persist,” And “According to a 2010 study on California farm workers, about eight in ten female workers said they had experienced sexual harassment, such as degrading comments or groping. Domestic workers have reported similar abuses in private homes. In both sectors, women’s vulnerability is deepened by fear of retaliation for reporting abuse, and a general lack of legal protections that apply to more conventional workplaces.”

The politics which seek to deny coverage to these women and influence reproductive decisions will have a long-term effect on the health of communities throughout the country. As women’s health is put at risk, so is the health of families and children. A lack of prenatal care leads to an increased risk of low birth weight, infant mortality and many other health concerns for the mother and child. As these children are often not allowed a healthy start in life, this will continue to affect this population and the communities in which they live for generations.

According to the Article 25 of the United Nations Universal Declaration of Human Rights, “Everyone has the right to a standard of living adequate for the health and well-being of himself and of his family, including food, clothing, housing and medical care and necessary social services… Motherhood and childhood are entitled to special care and assistance. All children, whether born in or out of wedlock, shall enjoy the same social protection.” We do not see this play out in many parts of the world due to a lack of political will and economic instability. Immigrant women deserve this human right in terms of basic protections and benefits that include health care coverage. Without access to basic public health care, everything becomes more difficult for these women. Equality cannot exist without equal opportunity.

UniteWomen.org, along with many others, sponsors the 4th annual Latina Week of Action for Reproductive Justice.

Please show support by signing the Petition to pass immigration reform that includes health care for immigrant women and families. For more information about the Week of Action visit The Latina Institute.

Jemina has a BA in Global Studies and is currently finishing her Masters degree in Public Health along with a graduate certificate in Conflict and Dispute Resolution focusing on restorative justice at Missouri State University. She has volunteered with UniteWomen.org on many task forces, State Director of Missouri and most recently as Regional Director and Director of Women’s Health.