Binders Full of Women…beyond the jokes

Binders Full of Women…beyond the jokes 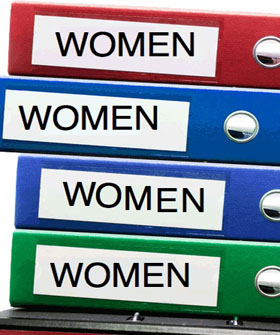 There were many moments during the debate Tuesday evening that caused me to have deep concern for women’s rights, but it was the reference to “binders full of women” that triggered a flashback.

In the early eighties, I was one of five women working in advertising sales in the Detroit area where 90% of our clients were automotive accounts. Just going through the interviewing process was an eye opener for me. All of my interviews were with men but none more sexist than the Sales Manager of a major local radio station telling me he didn’t think “I had the balls to sell radio”. I was determined to prove him wrong and sent a huge box of various sized balls to him with a note simply saying “From a woman with balls”. He still didn’t hire me…his loss.

After working in the business for two years, I was called by the Manager of a major national magazine to come in for an interview because he was told he “had to hire a woman”. My hour-long interview was completely about just how successful he was. When he made it apparent that the interview was over, I asked if he would like to hear about the success I’ve had. He answered that it wasn’t necessary.

I learned that the handful of women working in advertising sales in Detroit were also called to interview and upon finishing the interviewing process he informed his management that there were no qualified women to fill the position.

Fortunately the business has changed tremendously with women representing a majority in advertising sales and many of the automotive clients are women.

So to hear about the “binders full of women”, avoidance of answering the question about equal pay, talk of flexibility in the workplace so women can get home to cook dinner and suggesting women get married before having children as one of the solutions to our gun violence all had me once again wondering what decade we were in.

Let’s be very clear about what’s at stake for women in this election. Some are trying to paint this as purely an issue of abortion. Yes Mitt Romney, Paul Ryan and the 2012 GOP Platform clearly state they will overturn Roe v Wade and this will be accomplished with the appointment of anti-choice Supreme Court Justices. But our concern goes well beyond abortion.

The Romney/Ryan ticket knew they were losing women’s votes so they are now trying to confuse us by changing their stances on many issues. It is our responsibility as voters to make sure we know where the candidates truly stand on the issues, not simply believe their spin.

This can be accomplished by looking at Paul Ryan’s votes and budget, not how he’s now trying to sell a different position. We can look at the approved 2012 GOP Platform, that clearly states where a GOP House, Senate and Presidency want to take this country. And while almost every video of Mitt Romney states a different position on every issue, one of those positions aligns with Paul Ryan and the GOP Platform.

•The GOP Platform has nothing about pay equality

On the Blunt Amendment which allows employers to exclude contraceptives from the health insurance plans provided to their employees for moral reasons:

•Mitt Romney stated that he supports the Blunt Amendment

On the Personhood Amendment which defines life as beginning at conception that would limit contraceptives and in vitro fertilization:

•Paul Ryan co-sponsored the Sanctity of Life Amendment in 2009

On Violence Against Women Act:

•The GOP Platform states repealing Obamacare, transitioning Medicare to a premium-support model and converting Medicaid to a block grant program for states

•Mitt Romney and Paul Ryan have vowed to repeal Obamacare

•Mitt Romney declared marriage as between one man and one woman and asserted that he would seek a federal marriage amendment.

To further help make your decision, here is the 2012 Democratic Platform.

If this isn’t enough to help in making your decision, imagine if all of the legislation passed in the U.S. House of Representatives had passed through the Senate and been signed by the President. Personhood, DADT, and the Blunt Amendment would be law. Obamacare would be repealed, Paul Ryan’s entire budget would be law and we would have a 6-3 Supreme Court putting Roe v Wade at risk.

I’ve tried to put forth facts to help navigating through all of the rhetoric, but I cannot end this without expressing personally just how concerned I am for women in this country if we allow candidates who are determined to take our rights back to the 50’s to take control of any office in this country. This is not just about the legislation they are attempting to force on us. It’s an attitude toward women that will reverse decades of breaking down barriers in our homes, in our schools and the workplace. Please vote and encourage everyone you know to vote!