Why We Should All Be Learning African-American History Every Month

Why We Should All Be Learning African-American History Every Month 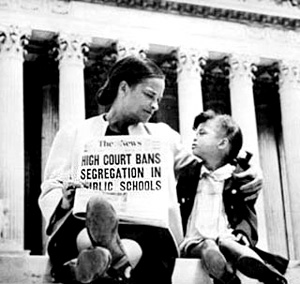 In 2002, the NJ Legislature passed Assembly Bill 1301, also known as The Amistad Bill; a directive for NJ schools to incorporate African-American history into their social studies curriculum. To be clear, this law wasn’t just for “those” kids or “that” community, and it was certainly not meant to be exclusive to the month of February. “In presenting the sweeping narrative of American history, African Americans have for too long, been cast in minor roles far from events, personalities and themes that become engrained in every student’s memory.”  This quote taken from the NJ Amistad Commission’s Executive Director, Stephanie James Wilson, captures what’s at the heart of this matter for me. Although this bill was passed over a decade ago, the content of assigned textbooks and intellectual discourse in New Jersey schools are falling far short of meeting this standard.

By 2016, I would hope that we collectively acknowledged the history of African-Americans as the history of America. These two stories are so intrinsically linked that to omit black experiences from the narratives we tell our children and ourselves about this country can at best leave us with half-truths. In order for systemic and enduring progress to occur, we have to be honest about our past, as a critical first step. Accomplishing this is made more difficult by the legacy of racial segregation and inequality that persists in classrooms throughout New Jersey. More than 60 years post Brown v. Board of Education, the evidence is clear that schools in the U.S. have overwhelmingly failed to achieve racial and economic diversity. This means poor kids are more likely to be in a school with a student body that is disproportionately poorer, while privileged students are isolated in their social circle. What are the consequences of perpetuating public policies that effectively promote segregation in education? A recent TakePart article states that, “children who aren’t educated alongside students of different backgrounds are ill equipped to live and work in a diverse world.” There is also compelling evidence to suggest that white students benefit from integrated schools, and classes that explore race and identity can produce improved academic outcomes.

So, are there really any winners when structural racism and educational inequity prevail? Maybe we want to rethink the paradigm of “good” versus “bad” schools when looking more deeply into how students are actually prepared to live in an increasingly diverse country and globalized world. As we conclude Black History Month 2016, I would encourage the willing and curious to continue to learn more about the experiences and contributions of people of color, and appreciate the complexity of America’s historical and political past to understand more fully the context of our present and each other.

About Nicole Scott-Harris: Nicole is a New Jersey native and resides in the NYC metro area. She works as an Environmental Justice Organizer and serves as UniteWomen.org Legislative Director for New Jersey. She is an alumni Fellow of the Rutgers Eagleton Institute of Politics and an executive committee member for the League of Women Voters of NJ’s Young People’s Network.