What I Felt After My Unite Against Rape Photo Got Posted

What I Felt After My Unite Against Rape Photo Got Posted 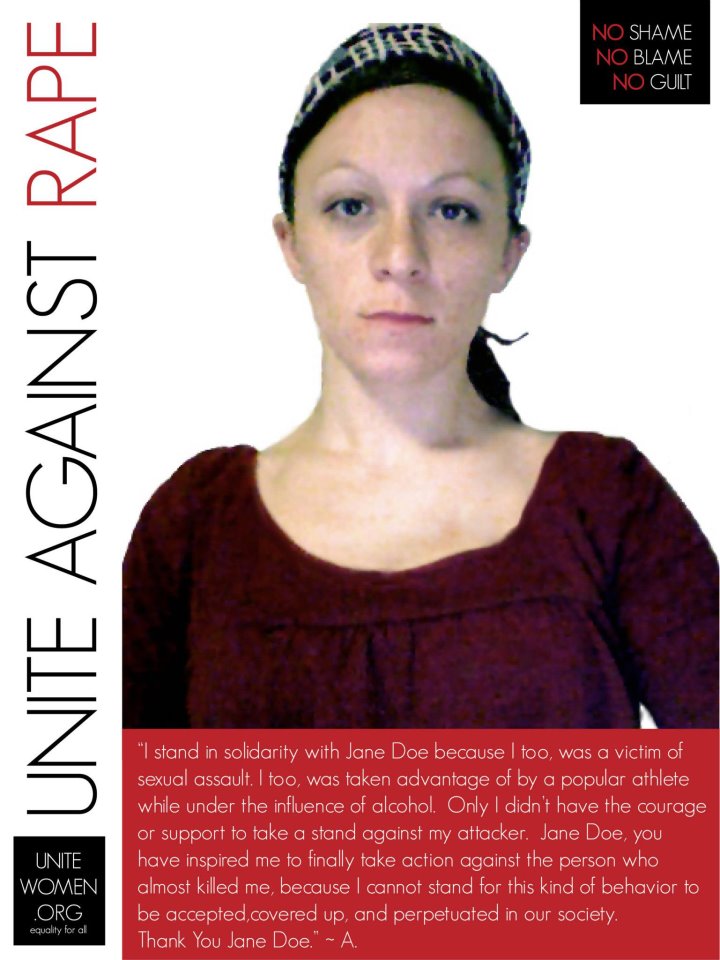 I am writing regarding my photo submission for the Unite Against Rape Campaign.

First, I would like to thank UniteWomen.org and the entire Unite Against Rape team for what they’re doing with this campaign. It’s amazing and beautiful to read the support/stories of all these women and men. I even wrote my own statement of solidarity and sent it in with my photo, yet when it actually got posted, I was very close to emailing them back to request to have it taken down. Only select family members and very close friends of mine know I was raped, so for me to post something like this on the Internet for the world to see was peculiarly brave of me.

My rape was different than most. I was raped December 2009, when I was 19 years old. I was going to school in Rhode Island and living in a house off campus with 3 male friends (none of whom were the rapist).  During that time in my life I was binge-drinking heavily; I drank to black out and blacked out at least once every weekend. Having only one sexual partner prior to college, once I got there I thought you were supposed to drink alcohol to facilitate sexual encounters. I have substantial social anxiety, so the alcohol eased various social scenarios for me, especially those involving the opposite sex.

The person who raped me almost killed me. Although I knew my attacker, the rape occurred during one of my blackouts, so I had no idea I was even having sex nor that this man was hurting me during so.  I woke up the next morning in his bed with blood gushing out of me; I’ve never seen anything so red in my life.  I didn’t know what to do.  I thought maybe it was an early period, but the pain was excruciating.  Despite the quarts of blood seeping out of me, I still didn’t know I was raped. I even went so far as to apologize to my rapist for getting blood on his sheets and floor. He drove me a few blocks back to my house; blood soaking through my underwear and denim jeans, I sat on my North Face fleece to avoid getting blood on his car seat (how courteous of me).  When I got to my house, 2 of my housemates had gone back home for the weekend, leaving the most inconsiderate one there alone with me.  When the rapist dropped me off, I was holding his blood-soaked mattress pad and standing outside in the freezing December air, banging on the door for said roommate to let me in.  When he finally did, I could see I had woken him up.

He saw the blood dripping all over the kitchen floor, but was more repulsed and annoyed than concerned.  I started to entertain the thought I should see a doctor, so I asked if he could maybe take me to the hospital. He half-assed mumbled, “Sure”, while begrudgingly rolling his eyes.  I said never mind, and went to my room to lay on a towel and bleed out. I called my best girl friend, explained the situation, and not until she sounded so alarmed did I realize this might be serious.  I dialed 911. What do I say? I just told the operator my vagina was bleeding; she seemed confused as to why I was calling an ambulance for this, but everyone in the hospital would soon see the severity of the situation.

The EMTs arrived to find me in my kitchen, still bleeding, and vomiting into a garbage can overflowing with beer cans; I would definitely call that my rock bottom moment.  When I got to the hospital, I didn’t know what to say happened. The nurses knew from the second I got there it was a rape, but unless I specifically said that, nothing could be done to investigate. I just said it was an accident, but consensual sex does NOT EVER result in injuries or harm in this manner. No matter how much blood or tissue was coming out of me, or no matter how close to dying I was, I didn’t think I was raped because I thought it was my fault for being drunk and somehow ending up in this person’s room at a party. Not even the handprint bruises on my breasts could convince me it was a rape. Society had me so conditioned to blame the victim, which in this case, was myself.

They called the surgical obstetrician; she took one look at me and sent me immediately to the OR.  While I was under they had to put in a catheter to drain my bladder. The injury was even worse when they got a look inside; my vagina was lacerated in such an odd manner, that my bowel was exposed.  Any longer without surgery and my body would have gone septic and/or I would have bled out.  They had to give me a blood transfusion too. They also questioned whether this rapist had perhaps put a foreign instrument in me, because of the rare damage he had caused.

There was a bad snowstorm that weekend too. I was miles/hours away from family, and I couldn’t tell them what happened anyway. I was all alone in that hospital, although select few loving friends braved the snowstorm to keep me company.  I distinctly remember this one therapy dog; she was a golden retriever named Molly. When I saw her was the first time I felt anything but empty in days.  I spent most of the 3 days I was in the hospital crying; the pain medicine helped me not to feel the extent of the damage, and also helped me to temporarily numb this whole nightmare.

The friend I called on the phone while on my deathbed (my dear Alexa) went to my house to clean up all the blood off the kitchen floor and my carpet, and even rinsed out my blood-soaked jeans. Everything else was in a bag in the hospital.  My male roommates could care less what happened, and even if they had wanted to they wouldn’t be able to understand.  Back then if I knew I had been raped, they wouldn’t have had my back in reporting it (some were at the party with us the night in question).  The one roommate I woke up that morning complained of all my blood everywhere; more things to blame on me.

The man who raped me is still free and walking the streets. It has been about 4 years later, but in Rhode Island (the state it happened) there is no statute of limitations on 1st degree rape. I had contacted him a year or so after the rape, one night after I had a nightmare flashback of it, in which I distinctly remember him pushing me down after I said it was hurting. He claimed to not remember anything from that night. When I told him about the surgery and the hell I went through, his response was, “To be honest I don’t remember much. All I can say is sorry.”

I decided to not email the Unite Against Rape team to have my picture taken down because I want him to see it.  I don’t know if I will ever have the strength, finances, or time to try and prosecute him, but something needs to be done so he never ever can hurt anyone else ever again. He is a dangerous monster disguised as a rugby-playing university student. My friend Alexa spoke with some of his former roommates and teammates. It appears they are frighteningly familiar with his sex offender M.O., yet have done NOTHING over the years to stop rapes they heard in progress (through the bedroom walls) or report past rapes they might’ve witnessed.  They say they can hear him being rough with the girls he takes home, and that just confirms a haunting suspicion I’ve had for years: that he’s hurt more girls since he hurt me.

Thank you for taking the time to read my story. I really want to try and reach out to other girls who may have been harmed by this man. Maybe they didn’t have the extent of physical damage as I did, but there are definitely other victims, whether they know it or not. I truly would not wish the pain and suffering I experienced on my worst enemy; it’s something no human being should ever have to go through.

I have severe PTSD from the rape, though thankfully on the physiological end, my vagina and body healed after the surgery. I no longer consume alcohol because I have seen the violent and aggressive behavior it fuels, plus I prefer to remember my nights nowadays. I have found that regular meditation, yoga, and cannabis use have been very effective remedies for coping with the PTSD, yet unfortunately, the memories will be ingrained in my mind for eternity.

In addition, luckily I am in a very healthy relationship now, with a very special boyfriend (Alec) who knows what happened to me. He helps me get through it everyday, and if there were more guys like him, this rape culture would definitely end. I decided to come forward, share my story, and get involved because I cannot sit idly by anymore. I was made to feel ashamed I was raped, but the only person who should feel guilty and embarrassed is the rapist. 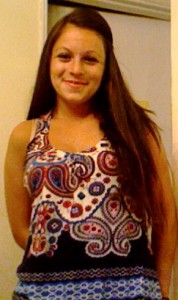 Thanks again & So much Love!

P.S. Some people may read this and say, “Well, a girl should know better if she chose to live with 3 boys.”, or maybe, “What does a girl expect to happen if she lets herself get that drunk?”, or anything like that. If anything along those lines comes to mind, then you are exactly what’s decaying our society by sympathizing with rapists and blaming the victims. No matter what you’re wearing or what state of mine you’re in, your body is ALWAYS yours and no one has the right to it besides you.