We Hold These Truths To Be Self-Evident 236 Years Later

We Hold These Truths To Be Self-Evident 236 Years Later 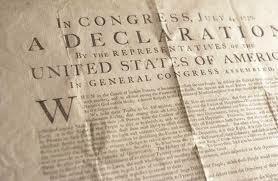 “We hold these truths to be self-evident, that all men are created equal, that they are endowed by their Creator with certain unalienable Rights, that among these are Life, Liberty and the pursuit of Happiness.–That to secure these rights, Governments are instituted among Men, deriving their just powers from the consent of the governed, –That whenever any Form of Government becomes destructive of these ends, it is the Right of the People to alter or to abolish it, and to institute new Government, laying its foundation on such principles and organizing its powers in such form, as to them shall seem most likely to effect their Safety and Happiness. Prudence, indeed, will dictate that Governments long established should not be changed for light and transient causes; and accordingly all experience hath shewn, that mankind are more disposed to suffer, while evils are sufferable, than to right themselves by abolishing the forms to which they are accustomed. But when a long train of abuses and usurpations, pursuing invariably the same Object evinces a design to reduce them under absolute Despotism, it is their right, it is their duty, to throw off such Government, and to provide new Guards for their future security.” – Thomas Jefferson, Declaration of Independence

It has been 236 years since the American Colonies issued the Declaration of Independence. In those years our young country has seen and survived the early pangs of a government and society. We have struggled through wars, economic difficulties, natural disasters, as well as political and social battles but the American spirit and tenacity has always been a shining example for those around the world who aspired to have a government “of the people, for the people.”

Throughout history, civilizations have come and gone; government and political powers rise and wane, but the American people have always been able to find their way and demand the constitutional rights that have been afforded to them and continue to be a nation of people who demand equality legislatively, judicially, and socially. Not only have we demanded equality but we have achieved equality for our citizens bit-by-bit.
It is unfortunate 236 years later there are still those in our country who are not being afforded the same equality as others. It is unfortunate that once again there are those American citizens who are denied equality because of gender, race, ethnicity, religion, sexual orientation, and socio-economic class.

It is often pointed out that the Founding Fathers were of course all men, who did not consider the views or opinions of their fellow citizens or afford them the same independence and freedom they gave themselves. The argument can be made that due to the social norms of the times the freedoms for women, immigrants, and those who did not own land or property, the Declaration of Independence was created only for those select few white men of a certain class.

On March 31, 1776 Abigail Adams wrote her husband John and reminded him of the importance of including women in the process of creating the Declaration of Independence –

“I long to hear that you have declared an independency. And, by the way, in the new code of laws which I suppose it will be necessary for you to make, I desire you would remember the ladies and be more generous and favorable to them than your ancestors.
“Do not put such unlimited power into the hands of the husbands.
“Remember, all men would be tyrants if they could. If particular care and attention is not paid to the ladies, we are determined to foment a rebellion, and will not hold ourselves bound by any laws in which we have no voice or representation.
“That your sex are naturally tyrannical is a truth so thoroughly established as to admit of no dispute; but such of you as wish to be happy willingly give up — the harsh tide of master for the more tender and endearing one of friend.”

“As to your extraordinary code of laws, I cannot but laugh.
“We have been told that our struggle has loosened the bonds of government everywhere; that children and apprentices were disobedient; that schools and colleges were grown turbulent; that Indians slighted their guardians, and negroes grew insolent to their masters.
“But your letter was the first intimation that another tribe, more numerous and powerful than all the rest, were grown discontented.
“This is rather too coarse a compliment, but you are so saucy, I won’t blot it out.
“Depend upon it, we know better than to repeal our masculine systems. Although they are in full force, you know they are little more than theory. We dare not exert our power in its full latitude. We are obliged to go fair and softly, and, in practice, you know we are the subjects.
“We have only the name of masters, and rather than give up this, which would completely subject us to the despotism of the petticoat, I hope General Washington and all our brave heroes would fight.”

“I cannot say that I think you are very generous to the ladies; for, whilst you are proclaiming peace and good-will to men, emancipating all nations, you insist upon retaining an absolute power over wives.
“But you must remember that arbitrary power is like most other things which are very hard, very liable to be broken; and, notwithstanding all your wise laws and maxims, we have it in our power, not only to free ourselves, but to subdue our masters, and without violence, throw both your natural and legal authority at our feet.”

In reading this exchange between a wife and her husband we see the beginning of a mind-set of American women from the beginning who understood the importance of independence, representation, and equality for women as well as men.

Woman in our country have experienced the legislative attacks that have been waged against us in the last several years to increase exponentially and once again we must remind those who wield their power in the political realm that the women of this country will not be put asunder. We take the streets and to the voting booths to not only fight back against those who would use their “arbitrary powers” to marginalize us but to declare and state in no uncertain terms “we have it our power, not only to free ourselves, but to subdue our masters, and without violence throw…[their] legal authority at our feet.”

So on this important day in our history, we celebrate the brave people who came to this country for freedom however; we declare those same words written by our forefathers as our battle cry –

“That whenever any Form of Government becomes destructive of these ends, it is the Right of the People to alter or to abolish it…”- Declaration of Independence

We will continue this fight and we will succeed just as those women who came before us have done. We will not stop until this great nation represents EQUALITY FOR ALL in our country.