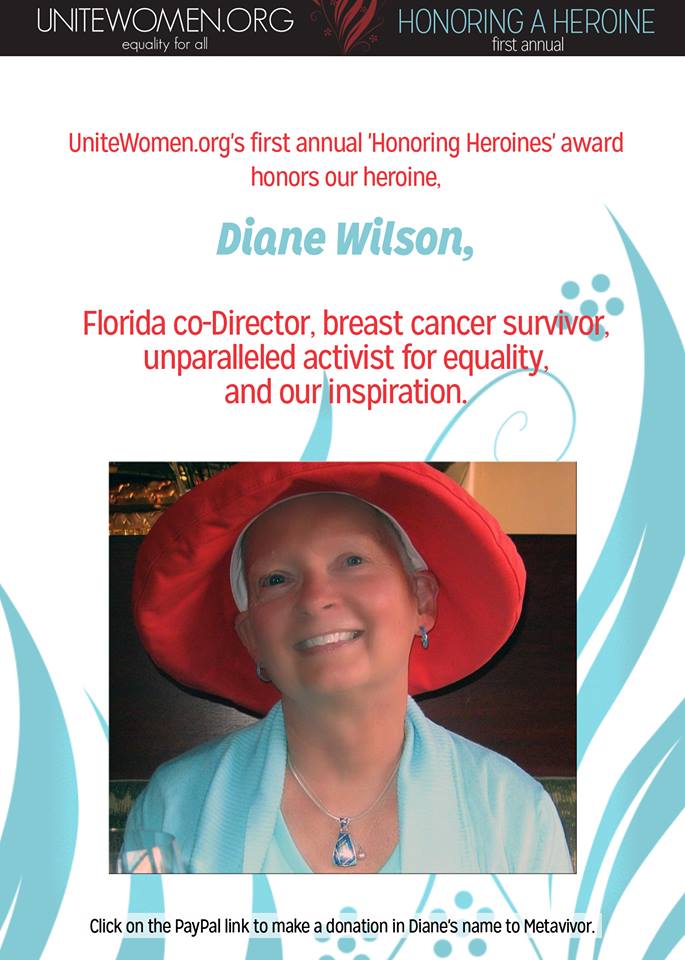 It is with great pleasure to present Diane Wilson, co-Director of Florida, UniteWomen.org, with our first annual “Honoring Heroines” award.  Many are aware of Diane’s passion in fighting for equality but may not know she has been fighting a battle of her own.

Diane did not make me aware of her breast cancer diagnosis until well after I deemed her to be one of our most effective activists across the country. Needless to say, once I learned of her own battle, I was in complete awe of her tenacity, passion and energy! I then met her in Washington DC at the Suffrage Centennial Celebration. At one point during the March, I was so tired and just wanted to rest. I looked over at Diane walking with such determination – there was no way I was going to give up. She has been a daily inspiration for me to keep fighting for equality.

UniteWomen.org will be making a donation in Diane’s name to Metavivor, a charity of Diane’s choice dedicated to the specific fight of women and men living with stage 4 metastatic breast cancer. If you would like to add to our donation, please click here and include “Honoring Heroines” in the comment section of your donation.

Diane has touched and inspired so many lives. A few have expressed their feelings starting with a sister-survivor from Florida.

Congratulations on being presented with the “Honoring Heroines” award by UniteWomen.org!  While we haven’t met, I’m moved to have learned about all your work fighting for the rights and equality of all women.  As a mother of two daughters, who I want to ensure grow up in a world where they have equal opportunity, women’s rights are core to who I am as a public official and Member of Congress.

Ours is a long struggle and the challenges are many – fighting for equality in education, health care, and workers’ pay; Fighting against domestic violence, rape, human trafficking, and poverty – where ever we find it.  I am tremendously grateful for your work and enduring advocacy and proud to stand shoulder-to-shoulder with you in creating a more humane and just world.

On a personal note, I understand that you are also currently battling breast cancer.  As a fellow sister-survivor, I want you to know that I stand with you in your fight.   As we acknowledge Breast Cancer Awareness month as a nation, it holds special meaning for those of us it touches so personally.  I know that for me it’s a reminder to never, ever, ever stop fighting this horrible disease, and I hope you will draw inspiration and strength from family, friends and sister-survivors everywhere!  But this month also reminds me to never let the disease define who we are or hold us back from our important work – which for us both is being a fierce advocate for all women.

Again, congratulations on receiving the “Honoring Heroines” award. You are the very definition of a “heroine” and I hope you will never stop inspiring and lifting up other women!  Thank you for your dedication, courage and determination!

Diane Wilson is UniteWomen.org’s co-Director for the state of Florida, a non-partisan, non-profit whose mission is to end inequality for women that stems from prejudice and discrimination and to defend and advance the human and civil rights of women and girls. The organization was founded in 2012 where Diane organized the Tallahassee rally, one of three rallies in Florida and 55 “Unite Against The War On Women” rallies across the country on April 28th of that year. Diane proved to be an amazing organizer and activist early on and was asked to co-Direct the state with Jan Lella.

In addition to her role with UniteWomen.org, she lends her time and wits to the Wakulla County Democratic Woman’s Club, where she served as the Treasurer and then President. Diane, a mother of four, has four grandsons and one great grandson. In August of 2012, Diane was diagnosed with incurable metastatic breast cancer and has been fighting that battle while simultaneously working to help Democrats and women throughout Florida. She and her husband Steven K. Wilson have been married for 36 years. Her children all worship her and rightfully so—she’s beyond a good role model, she’s an inspiration for women everywhere.

From Renee Davis, Board of Directors, UniteWomen.org:

Diane is the epitome of integrity, strength, courage, and fierceness. From my first interaction with Diane before the 4.28.12 rallies, I knew she was an amazing woman with dedication and leadership skills to lead women in the fight for equality. She is a true sister and I am a better person for knowing her.

Why does Diane deserve this honor?? Here are just a couple of reasons — dedicated, passionate, honorable, kind, loyal, awesome!  But most importantly … my FRIEND.

Diane is a person who touches you just by saying Hello. She was one of my first mentors, friends and support systems when I starting with UniteWomen.org and continues to play that role for me. In addition to her own activism, she is someone who gives so much of herself to be sure that no other woman or human being is left behind. She represents so many of us by just being herself.

Diane helped me immensely when I joined UniteWomen.org. With everything on her plate, she always seems to take time to help and care for others. I don’t think she is aware of the love so many have for her.