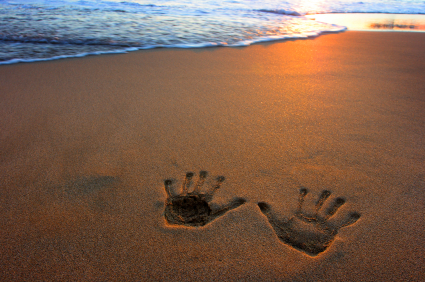 Her abuse started when I was three. Full of fury and rage, She’d beat the shit out of me. My saving grace (despite that it was “All My Fault!”) was I knew I was too little to be responsible for something this big. It was this little piece of me She could never beat away no matter how much She tried. I was very smart so I never repeated the behavior that elicited Her abuse, but it didn’t matter because it would happen anyway. It was as if all this pressure would build up inside Her and erupt all over me. I didn’t blame Her; it was just something that happened like a volcano, although conveniently, only exploded when my father was at work. There were good moments too and in my mind I just had to get through the bad ones so I could get to the good ones.

Years later, my husband went to dry his hands on the kitchen towel hanging on the refrigerator handle. I was standing in front of the refrigerator and started screaming. His outstretched hands reaching down to the towel was the trigger. Afterward, looking where the towel was helped me to comprehend just how small I was when She started to come after me

When I was nine She had her first nervous breakdown. It was around Easter. She came up to me with a big gentle smile on her face and grabbed my hand and said “I’m so very sorry to tell you this, sweetheart, the world is ending.” She launched into some religious ranting about Jesus coming and all I could think was,” Crap! I hope Jesus doesn’t get here before I get my Easter basket!” A lot of dramatic things happened and then one day my sister and I woke up to find a friend of our grandmother’s in our living room. Miss Criss mentioned that She had a nervous breakdown. I thought Her nervous was broken and She would come home in a cast. In some ways, She never came home.

My right eye turned inward while She was hospitalized. My dad took me to an eye doctor who said that there wasn’t anything wrong with my eye; it was stress. Dad found a therapist for me and another one for my sister at the Staten Island Children’s Mental Health Center. I was lucky that Risa was a good therapist. My sister’s sucked! All she did was make my sister do homework during her session. The therapy helped enough that my eye turned back to normal but did not address Her abuse. That was still a secret, even from me.

After Her breakdown, the beatings stopped but Her abuse became more sinister and severe. Control, humiliation, fear, and isolation were some of Her favorite new weapons to use against me. She delighted in the pain and harm She caused me; as if it were a victory. She informed me repeatedly now that She was “crazy with the papers to prove it” She could kill me and get away with it. I knew looking into Her eyes that She was capable of it, so Her attempts didn’t surprise me. There were no more good times to offset the bad ones.

My sister and father suffered too, but almost all of Her abuse was centered on me. She turned them against me so I didn’t have anyone. I tried to explain, but She was very convincing because She believed all the things She was saying about me and they did too. As long as Her focus was on me, it wasn’t on them. It was understood that my sister was my dad’s and I was Hers. Any relationship I was lucky enough to form hung by a very fine thread and at any moment She could tell them “the truth about me” and swipe them away like cobwebs. Relationships were a liability so I avoided them.

When I was 15 She left and my father got custody of my sister and me, which was very unusual and unheard of at that time. My sister and I worship him to this day because he didn’t run out on us but he could be neglectful, cruel and twisted. My dad and sister had always gotten along and I felt unwelcome. Dad would give my sister money to buy clothes and things but not me. Years later when we spoke about some of his behavior; my dad he said he thought I was crazy because of what She said about me. Sometimes She would be especially cruel to provoke my reaction and that would serve as Her evidence of my insanity. It would take years for my father, sister and I to figure out the truth about me.

About a year later I went to live with Her. It was fine for a while. There is a cycle to Her mental decompensation. It starts with depression (and Her almost complete reliance on me); She then becomes suicidal (hide the knives), then delusional, then paranoid, then homicidal (hide the knives again). The last two usually directed toward me. I didn’t know these words; I just knew the behavior. By this time I’d spun around this cycle countless times with Her.

One day I came home from school and She told me She had magical powers. “What kind of magical powers?” I asked. “Magic that can stop cars.” She replied. I realized, after a few questions, that She was walking in front of cars and the drivers were slamming on their breaks to avoid hitting Her. I called a cab to take us to the psychiatric emergency room.
She didn’t want to be hospitalized and acted completely normal when we got there (can’t even tell you how many times that happened!!!). The doctor asked me if She was homicidal. I said no. He asked if She was suicidal. I said no. Had he asked me if She tried to harm Herself I would’ve said yes. I thought suicidal applied to someone who slit their wrists or tried to shoot themselves. She was not admitted. I called a cab, and home we went.

Later that week I told my therapist, Raquel, about the hospital not admitting her. Raquel advised me that the hospital can only admit Her against Her will if She is homicidal or suicidal. I told Raquel about the magical car-stopping powers. Raquel said that anytime someone does something harmful to themselves, it’s suicidal. If they are harmful to someone else, it’s homicidal. “Crap!” I could have avoided living through the fast approaching Rinse and Spin cycle!

As I knew it would, Her behavior got worse. I had to keep an eye on Her constantly. I would go to school, work my shift at McDonald’s and never know what I would walk home to. She was getting aggressive. I can tell when this stage starts because Her voice and body language changes. Of all the cycles, I dread this one the most. She starts to feel powerful then omnipotent. She doesn’t sleep. I haven’t slept in three days. She’s getting increasingly more agitated and I’m too afraid to close my eyes. It’s after midnight and She’s been calling Her friend every fifteen minutes and it’s been going on for hours. Exhausted, I said, “You have to stop this.“ She picked the phone receiver up and with all Her might (which is 10 times stronger when She is mentally ill) and started to swing to hit me in the head with it. I covered my head with my arms and screamed. I was cornered and I curled up in a ball on the floor waiting for the beating. Nothing happened, my screaming seemed to snap Her out of it and She walked away as if nothing happened.

I can’t remember how I got Her there, but we went to the psych emergency room. This time I answered the questions correctly and She was admitted. I was so relieved. I had lived through this stage before and what would come next made the phone incident look like a cakewalk.

A week later I was asked to come up to the psych ward for a meeting. I was met by three counselors and Her. All four of them were on one side of the table. There was one seat for me across from them. The counselors were not friendly to me. I was advised by them that I was the cause of Her breakdown and that I would have to live somewhere else. She said nothing. While I was leaving and out of everyone’s earshot, She said full of rage, “You think you are more powerful than me? Go fuck yourself.”

I had to beg my dad to let me come back to live with him. I remember feeling loved and wanted by both of them when I was younger, but that was a long time ago. When I graduated high school She said, “You pretty much raised yourself.” “If you want to go to college you will have to pay for it; with all that had been going on we hadn’t given any thought about you.”

I was 19 when I found out my dad loved me. I was working in Manhattan during the day and going to college at night. I had to get up very early for my 2½ hour commute into the city. Every once in a while I could afford to take the Express bus which cut down my commute considerably. My neighbor and I had the same dress and we would laugh if we happened to wear it on the same day.

One day I came home from work and my dad hugged me. He never did this and I was taken aback. His voice cracked when he spoke to me and he had tears in his eyes. That morning on his way to work he saw an ambulance and police at the Express bus stop. In the distance he saw a woman on the ground that had gotten killed by the bus. She was wearing the dress that I had and he thought it was me. He said he couldn’t move his legs to get out of his car. After a while, one of our neighbors came by and my dad found out it wasn’t me. I now knew that he cared whether I was alive or not.  I honestly didn’t know this.  From this point on our relationship would slowly get better.

She found a way through all the road blocks I have constructed; on my home phone, cell phone, Facebook pages and my life via private messages on my public business Facebook page last week and yesterday.   I take some comfort She now lives 3 hours away and most likely won’t show up at my door.  I love where I live and the life my family and I have built, it’s one I could never have imagined when I was younger or thought I would live long enough to experience.   In my weaker moments, I wish I could vanish without a trace but I always come back to the friends and family I am so fortunate to have now in my life and I muster up my courage and stay put.

Words are so incredibly powerful. For this reason, I purposely avoided using mother or mom in the above piece. As long as I thought of Her as my mother I would go back again and again.