Suffrage Centennial Celebration – Honoring the Women Who Made History

Suffrage Centennial Celebration – Honoring the Women Who Made History 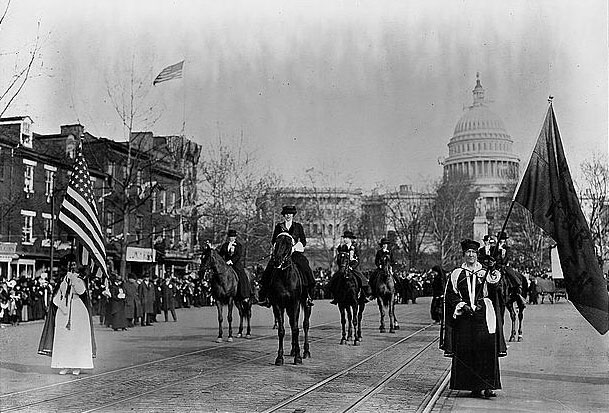 Washington, D.C. – UniteWomen.org, a non-partisan national women’s rights organization, is honored to be co- hosting the Suffrage Centennial Celebration—in Washington, D.C. the weekend of March 1-3, 2013—with the National Women’s History Museum and Sewall-Belmont House & Museum. This historic weekend of events will celebrate and honor the women who marched for our right to vote 100 years ago.

The events include exhibits commemorating The Suffrage Parade and the quest for women’s rights at the National Women’s History Museum, the Smithsonian American History Museum, the Newseum, the Sewall- Belmont House and others; several lectures and panel discussions on modern women’s rights activism and the role of social media; a screening of Iron Jawed Angels, a multimedia staged reading of the play TAKE WHAT IS YOURS; a reenactment of the Suffrage March and the display of the Constitution and Bill of Rights at the National Archives.

Delta Sigma Theta is organizing the reenactment of the march commemorating “the 100th anniversary of the role that the 22 Founders of Delta Sigma Theta Sorority, Inc. played in the 1913 Women’s Suffrage March.” This parade, on Sunday, March 3, 2013, will symbolically follow the exact route of the March 3, 1913 Woman’s Suffrage Procession. We will gather at the Capitol at 9:00 a.m. and proceed down Pennsylvania Avenue, assembling on the National Mall for closing remarks.

To participate in the parade, organizations are required by Delta Sigma Theta to pay a $500 registration fee. UniteWomen.org would like to extend an invitation to any individual or organization unable to pay the registration fee to march with us. We will not require anyone to pay to unite with us in honor and celebration of all who marched for women’s suffrage 100 years ago. If you would like to march with UniteWomen.org, reserve a free ticket at http://unitewomen.ticketleap.com/suffrage-centennial-celebration-march-/ and please consider making a donation to help defray the cost of our registration fee by clicking on “Donate” at www.unitewomen.org.

“This centennial anniversary could not be more timely,” said Karen Teegarden, President/CEO  of UniteWomen.org. “Last year, the amount of legislation threatening women’s rights reached such a fever pitch that an immense groundswell of support for a resurgence of the Women’s Rights Movement developed all across the country. Our organization grew from an idea into an established, effective force for women’s rights in a matter of months.”

UniteWomen.org organized an unprecedented 55 rallies in 45 states on April 28, 2012 in response to the legislative “War on Women.” This organization was founded on February 19, 2012 and is now a well-respected national network.

“There is no better way to educate the public than to reflect and honor those women who came before us in fighting for women’s rights,” says Renee Davis, Executive V.P. of Programs. This weekend is all about celebrating how far we’ve come. The Suffrage Centennial Celebration is an opportunity for women of all ideologies, backgrounds and political views to come together to celebrate and be thankful for those who fought for our rights.”

For a full list of events, please visit www.suffrage-centennial.org