Shedding Shame – A Personal Journey through Unite Against Rape

Shedding Shame – A Personal Journey through Unite Against Rape 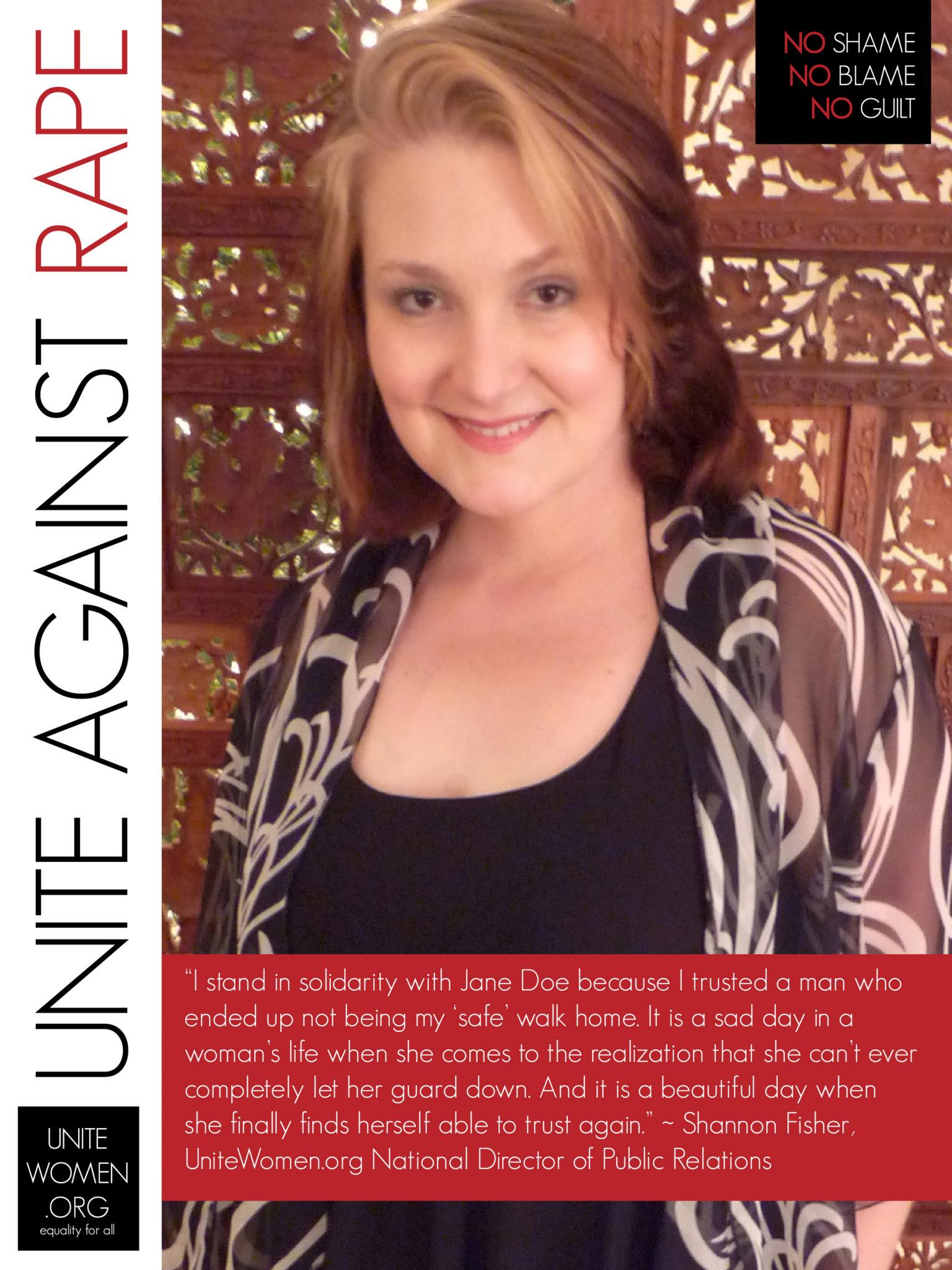 As the National Director of Public Relations for UniteWomen.org, I have been extremely proud of our Unite Against Rape campaign. From the first time we discussed it, I sensed this campaign would be bigger than the sum of its parts. We were faced with an opportunity to use our social media platform to spread awareness of the epidemic of rape in our culture. By enlisting a large variety of participants to tell their stories, we would be able to contribute to a conversation that desperately needs to happen and inspire courage in rape survivors and their supporters to stand in solidarity and speak out against rape. We could diminish the societal stigma that often accompanies having been raped. We could attempt to eradicate victim shaming and blaming – where adult victims who have done nothing wrong are depicted as having “asked for it” and child victims are made to feel dirty and tainted for having been victimized through no fault of their own.

The timing was right; the issue was already in the public eye because of the rape trial in Steubenville and the horrific gang rapes being covered by the media in India and other places in the world. It was clear to me that we had a real opportunity here to make a positive impact by keeping this issue in people’s minds beyond their brief focus on a headline that would soon fade from memory. I knew we could do something to lessen victim shaming and blaming. What I didn’t know is that the Unite Against Rape campaign would have a far deeper personal impact on me than I could have imagined.

When I was in college, I was raped. It is a far too typical story – a girl drinking too much on a weekend night at a party with her friends. She ends up alone with a guy she knows, someone who has promised her friends he will get her home safely, but something goes horribly awry. My story is the same as that of thousands of women. One in four women will be sexually assaulted during their time in college. One in four! Many of the men committing these crimes genuinely feel they have done nothing wrong. They don’t view being forceful with a woman who is protesting their advances, penetrating a woman who is too drunk to be able to protest, or forcing themselves on a woman with whom they are already in an intimate relationship as a problem.

THIS is the conversation we need to have. In every household. In every classroom. In every locker room. In every relationship. In every family. And in every court of law. Every person in our society needs to know what rape is, that rape is wrong and that – regardless of the circumstances – rape is never, ever, the victim’s fault. Rape occurs due to one factor and one factor alone: the decision of a rapist to rape. We need to teach men what rape is and not to do it. It sounds simple, but with the epidemic of sexual assault in our culture – it is evident that we have failed to teach this to our boys and men, and society as a whole is suffering for it.

It is our sincere hope that the Unite Against Rape campaign will positively contribute to that conversation. We created three separate themes for the graphics in the campaign – aiming words to survivors, perpetrators and bystanders – and posted this on our Facebook page asking for submissions for all three. Of all of them, the survivor graphic is the most powerful to me: “No shame. No blame. No guilt.”

Rape survivors, and their supporters, began submitting their photos and quotes to us. Several of the people at UniteWomen.org also submitted their own photos and stories. I decided to submit my photo and a quote, but not as a survivor. I submitted the quote, “Every rape victim is a daughter, mother, sister or friend. We must learn to look at a woman and recognize that she is a complete being, comprised of more than just her outward appearance.”

As I read the words of many of the submissions we had received from people, and looked at their faces, the stories touched me deeply – even the short quips and anecdotes. I admired their courage and reveled at how brave they were to release their image (and sometimes name) in a national campaign saying, “I am a survivor of rape. I stand united with Jane Doe and millions of other survivors of rape.” I felt a little embarrassed that I was still hiding behind the curtain of shame and guilt that accompanies having been raped and that I had only submitted my quote as a supporter instead of a survivor. Sometimes the blame game is worse in our own minds than it is from the perpetrators and society.

One night, I was talking to some other UniteWomen.org team members. We were going through several of the completed graphics for the campaign and discussing how they had affected us. It hit me that in order to be a leader in this fight I must come out from behind the curtain of shame. The entire goal of this campaign is to eradicate victim blaming and shaming. So I changed my quote:

“I stand in solidarity with Jane Doe because I trusted a man who ended up not being my ‘safe’ walk home. It is a sad day in a woman’s life when she comes to the realization that she can’t ever completely let her guard down. And it is a beautiful day when she finally finds herself able to trust again.”

It is also a beautiful day when a woman is profoundly and positively affected by the very campaign she helped to implement. Who would have guessed, as I was working hard to try to make a difference in the world, that the most measurable change I would see would be in myself? No shame. No blame. No guilt. No more!

Shannon Fisher lives in Richmond, Virginia and serves as both the National Director of Public Relations for UniteWomen.org and the Marketing and Public Relations Director for George Golf Design.  Shannon graduated from The College of William & Mary with a degree in Theatre and Speech.  She then went on to complete the year-long Political Leaders Program at the Sorensen Institute for Political Leadership at The University of Virginia.  These two disciplines merged very well into a career in Public Relations.  Shannon’s writing has been published in several newspapers, magazines, blogs and anthologies, and she has a strong affinity for communicating ideas to both the public and private sectors.  Twitter Handle: @FisherShannon