President Trump? Not If We Unite!

President Trump? Not If We Unite! 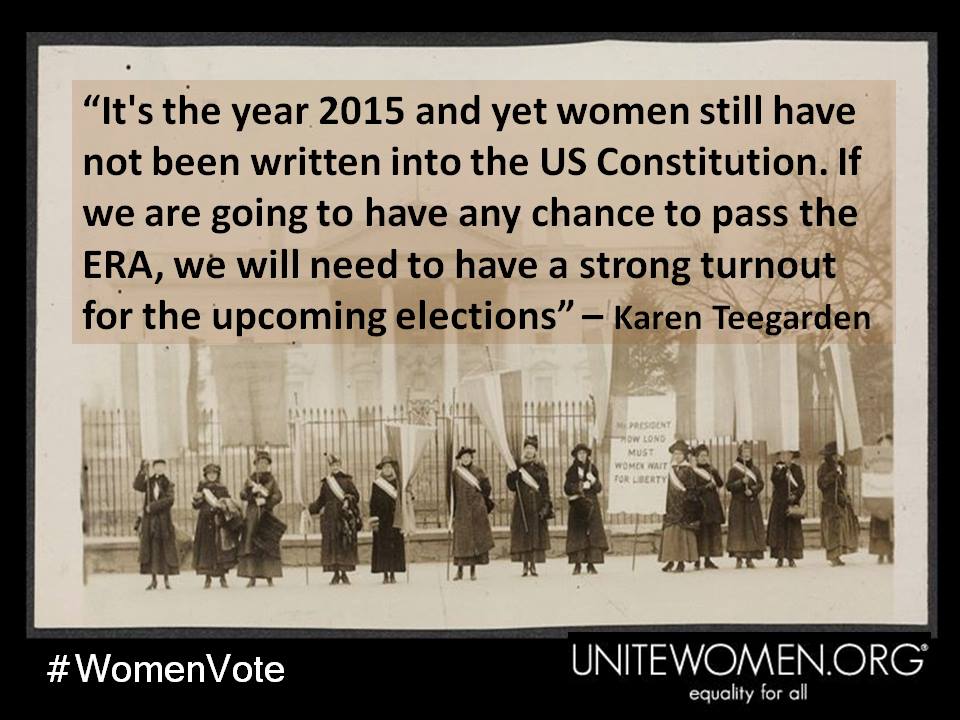 In March of 2014, Helene Swanson left San Francisco on her pilgrimage to walk across the country, covering the 15 states that have yet to ratify the ERA. Her pilgrimage ended on Women’s Equality Day (August 26, 2015) with a March and Rally in Washington DC. I was honored and humbled to share this day with Helene and so many activists celebrating her journey. What follows is my speech at the rally. Video of speech

“Activism comes in all forms of participation. This rally is testament to that. Today’s rally is the culmination of one woman walking across this nation, stopping in the 15 states that still have not ratified the ERA. Individuals and organizations have joined Helene’s cause, by participating in meetings and rallies; helping with social media, PR and finding a place for her to rest her head at night.

Thank you to Helene & thank you to all of the individuals & organizations who helped Helene on her journey. I must give a shout out to Sandy Ashcraft & Carey Baker who manage our social media platforms and many of our state groups who donated so much of their time & resources to help Helene’s effort.

Helene asked me to tell you about UniteWomen.org & some of the work we do.

In February, 2012 a panel of men sat before Congressman Darryl Issa’s House Oversight & Government Reform Committee’s hearing on contraception, to testify on our behalf about birth control. A Facebook friend I met working on the Obama campaign, Desiree Jordan from NYC, and I were having one of our bitch sessions over all of the anti-women legislation and rhetoric. I asked why aren’t women taking to the streets! She answered…build it and they will come.

We hung up and I started a group on Facebook called ‘Unite Against The War On Women’. Within a week, we had over 12,000 people join our effort to organize rallies across the country. I set up state groups and an online infrastructure to handle the coordination of the rallies. Desi led a team to plan the NYC event.

In 10 weeks, 22,000 people helped organize 55 rallies in 45 states on April 23, 2012. I soon realized that while the rallies were the original goal, they really needed to be the jumping off point to continue our work fighting the war on women. I put a team together to begin creating what is now known as UniteWomen.org which is our 501c3. We then launched UniteWomen.org ACTION which is our 501c4. We have groups in all 50 States and DC and Desi separately started Unite Women New York, Inc.

We are known for our social media clout & have worked with many organizations promoting their efforts. We were the social media arm for the HT Challenge campaign by the Human Trafficking Coalition’s effort during the past two Superbowls; and the Suffrage Centennial Celebration in 2013.

Our priorities currently center around our Know Your Candidates campaign which is a series of graphics outlining where candidates stand on issues that affect women & their families; & Laws of Two Nations, a series of graphics showing the very different countries we’d have if bills proposed by the GOP became law vs. those proposed by Dems; We just completed our second annual women’s rights curated art show giving a platform to feminist artists from around the nation at a gallery in NYC.; and Unite Against Rape campaign. 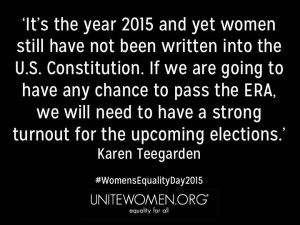 It’s the year 2015 and yet women still have not been written into the US Constitution. If we are going to have any chance to pass the ERA, we will need to have a strong turnout for the upcoming elections. Low voter turnout in 2010 and 2014 created anti-women legislators controlling the US House and Senate, the majority of Governorships and State Legislatures.

The Rising American Electorate or RAE comprises of unmarried women, African Americans, Latinos, other people of color and people under 30. They are overwhelmingly responsible for the recent growth in the U.S. population. 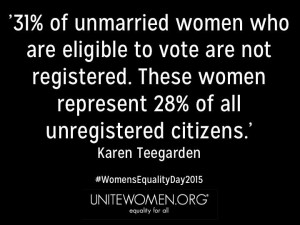 It is critical that we all work on registering and educating voters and GOTV efforts and it’s not too late to start! UniteWomen.org is focusing on election education during the month of September and once again partnering with the League of Women Voters and National Voter Registration Day on September 22nd. You can all get involved as individuals and within your organizations. 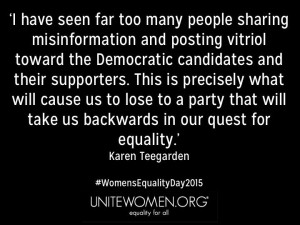 No candidate is perfect but let’s take our lead from the candidates and make sure we are focusing on their strengths and what’s at stake if any of the Republican candidates take the WH. And let’s also remember that a President Clinton or President Sanders will have no chance to implement any of their agenda if we do not take back the Senate and make gains in the House.

Two, that women’s organizations & progressives firmly stand with the BlackLivesMatter movement. No one is saying that all lives do not matter but using that phrase demeans the systemic racism still prevalent in our society. We, of all people, should understand the need for this movement. How many times have we all heard “Why do we need the ERA or why are you fighting for women’s rights?…shouldn’t you be fighting for human rights?

Our white privilege doesn’t allow us to fully understand the experiences that led to the BlackLivesMatter movement. Because we haven’t lived it, doesn’t mean we can’t recognize wrong when we see it & it doesn’t mean we cannot or should not be supporters & more importantly advocates for the cause. Black Lives Matters is a woman’s issue we must fully embrace. 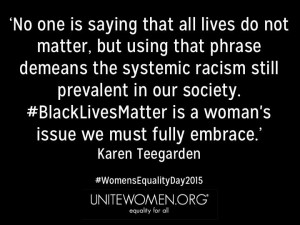 So let us unite and work together to support candidates who stand for women’s rights and get involved in GOTV efforts so we can finally be rest assured that women have equality under the Constitution of the United States.”

About Karen Teegarden: Karen is the CEO of UniteWomen.org, founded in February, 2012. She is a graduate of the University of California at Berkeley and worked in the marketing and advertising sales industry in Michigan. Her daughter was raised to believe in her core that she was created equal. Karen began this journey to assure that all women live in a country that protects their equality.