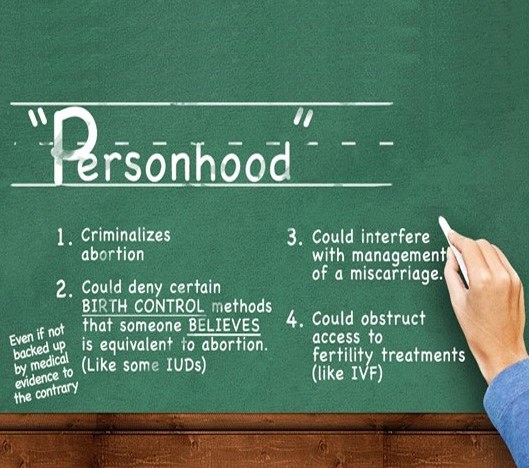 On October 3rd, Terri Lynn Land participated in a call-in radio show on Michigan Public Radio’s Michigan Calling. I called and asked her to explain her stance on the Personhoold Amendment and the Hobby Lobby decision. Her answer? She doesn’t support Personhood. Yet Right To Life Michigan endorsed her based on her support of Personhood. Her answer was contradictory to the answer she had to give in order to be endorsed by Right to Life Michigan, so it left me and many other Michigan voters, wondering her true position.

The Personhood Amendment is in the official GOP Party Platform and is so extreme the voters of Mississippi soundly voted it down in 2011. The term “Personhood” is so toxic, many candidates are running away from the term but stand with a repackaging of Personhood – a Human Life Amendment to the U.S. Constitution, effectively establishing personhood from the moment of conception. There are  two Ballot initiatives in Colorado (67) and North Dakota (1) but neither use the term “Personhood.”

If Terri Lynn Land stands with her position prior to her answer on ‘Michigan Calling’, she needs to explain to women and their families why she supports Personhood and the Hobby Lobby decision which would:

• If you’ve already established a fertilized egg is a life, are not countless supporters of Personhood having babies thrown in the trash each time their unused in vitro fertilized eggs get discarded, thus committing murder?

• If a physician is faced with harming a fetus in order to save a woman’s life, couldn’t the physician be sued?

• Forms of commonly used birth control that were deemed abortifacients in the Hobby Lobby Decision based on the false belief that life begins at conception, could now be banned.

All voters in Michigan deserve to know where candidates stand on issues that would so dramatically affect their lives. Why is Terri Lynn Land taking two positions on so many issues in her campaign to represent us in the U.S. Senate?