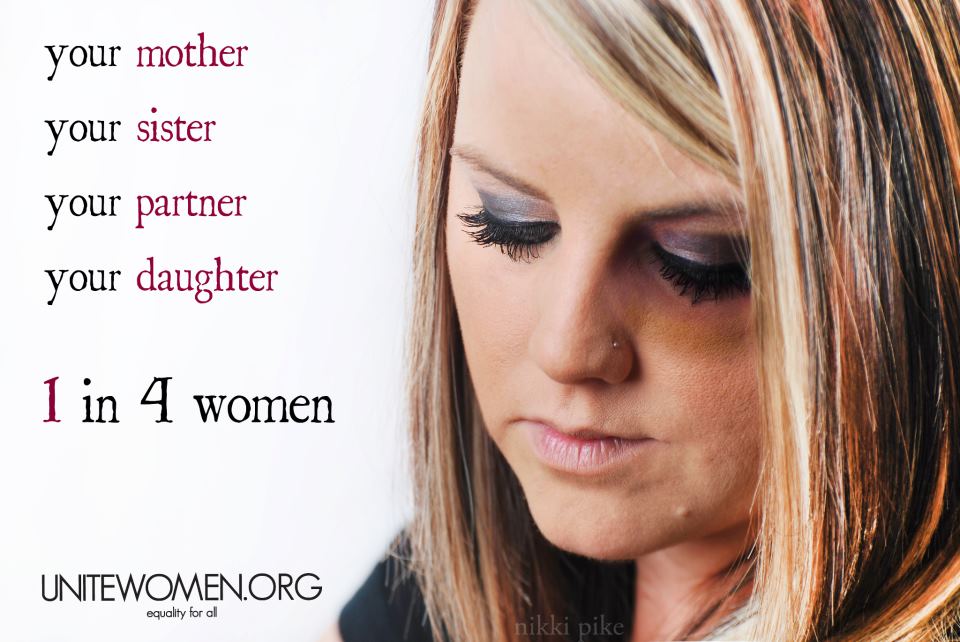 Sitting here, trying to think of what to even write is hard.  There are so many points I want to touch and so many things I want to convey.  There are emotions of anger, emotions of helplessness, and emotions I can’t even put words to.  Unless you have been in a situation like this, there is no way to understand the amount of baggage that comes along with domestic violence.

Like many children (more than we would like to admit), my childhood wasn’t rainbows and unicorn farts.   It was my mother working double/triple shifts in order to put food on our table and keep our power on.   It was putting on a straight face for school and pretending like everything that went on at home wasn’t real.  It was only having one true friend who knew what was going on at home and the only one I was able to confide in.  (inserting praise here for her and for her not judging me based on my uncontrollable circumstances- and never looking at me with pity, but being the backbone I needed, and still need today…)  It was having to see my mother vulnerable, knowing she was the strongest person I knew then and the strongest person I know today.  It was having to feel the bond a child does with her father and realizing that means nothing when your competition is alcohol.  Alcohol didn’t make you cool macaroni art, Asshole.  Not that I appreciate my father being an abusive alcoholic… I do appreciate the character building.

There are several things I remember about my childhood, but I remember these the most:

I remember the strength my mother instilled in me.

I remember the sacrifices she made in order for me to have the best life possible in that situation.

I remember the long nights she worked.

I remember the love that she gave me, which was enough to make up for two parents.

I remember her treating me with the maturity that I deserved and not treating me as if I were just some dumb kid who didn’t understand the circumstances.

I also remember the abuse.  I try to forget it, but it’s the cornerstone of my life.  It was what shaped me in to what I am today.

I remember times when he wouldn’t like what Mom had made for supper so he would throw it against the wall.

I remember times when he would come in and just break whatever he could get his hands on.

I remember times when he would spend his entire check on whiskey; Mom and I would have to eat Ramen noodles for meals.

I remember times when he would not care whether we had a place to live or not.  Numerous times we slept in rinky motels, and even our car.

I do have one good memory of him.  Can you actually believe it?  One time, when I had fallen asleep in the car, he carried me into our house.  I remember waking up but that feeling of being loved was so strong that I pretended to still be asleep… And at that moment… I felt like I had a father… And at that moment…. Nothing else mattered… And at that moment… I was whole… I was in a family… All the beatings…  All the motels…. All of that didn’t matter…  Despite the abuse, that is the memory that sticks out the most in my head of my father.  I can still hear his heartbeat and the sound of him breathing.

A couple of years ago, my father passed away.  With him I thought would pass the memories, the anger, and the frustration, but it only seemed to magnify it.  Seriously, get this…. The last words my father spoke to me were, “I never touched you or your mother.”  Yep, that’s the shit I have to live with.  I honestly don’t know if he was delusional and believed it, or thought that I was crazy enough to believe him.  The last words I spoke to my father?  “How would you know?  You were drunk my whole damn life.”  *Hangs up phone*  This conversation still rings through my head from time to time.  I don’t know if he’s haunting me or what.  If he is, he’s around more now than he ever was my entire life.  When he died, there were so many unanswered questions… So many words I would have liked to have said.  I really believe I have just relied on him too much, in the past and now.  I guess I expected one day there would just be this giant breakthrough that would relieve me of all this downright bullshit.  Every time I believe I’m over it, something brings up memories and hurt.  It’s nothing I can’t live with, but it does get fucking annoying after a while.

I write this not for pity, nor for people to know my shit…  I write this because more people need to know how common it is.  There are way too many people living with the demons of the past.  Way too many women and children are dealing with same issues.   I encourage you to take a stand when you see something going on; whether it is with a friend or a stranger.  The actions you take can save someone’s life.   If you are the one going through this, take a stand now and get out.  It isn’t easy, but there are plenty of people to help in that situation.  Even me, I’ll kick some ass if I have to.  Pretending like nothing is happening, does not make it go away.   I used to be ashamed of the way my childhood was.  I was ashamed of the way I had to live.  I know all too well what it’s like to live poor, and I’m talking about poor…. Like *that bitch be poh*…..  But if one person can benefit from knowing they’re not alone… Then it’s worth sharing.

Wow, I really just wrote a lot of shit, when I wasn’t planning to.