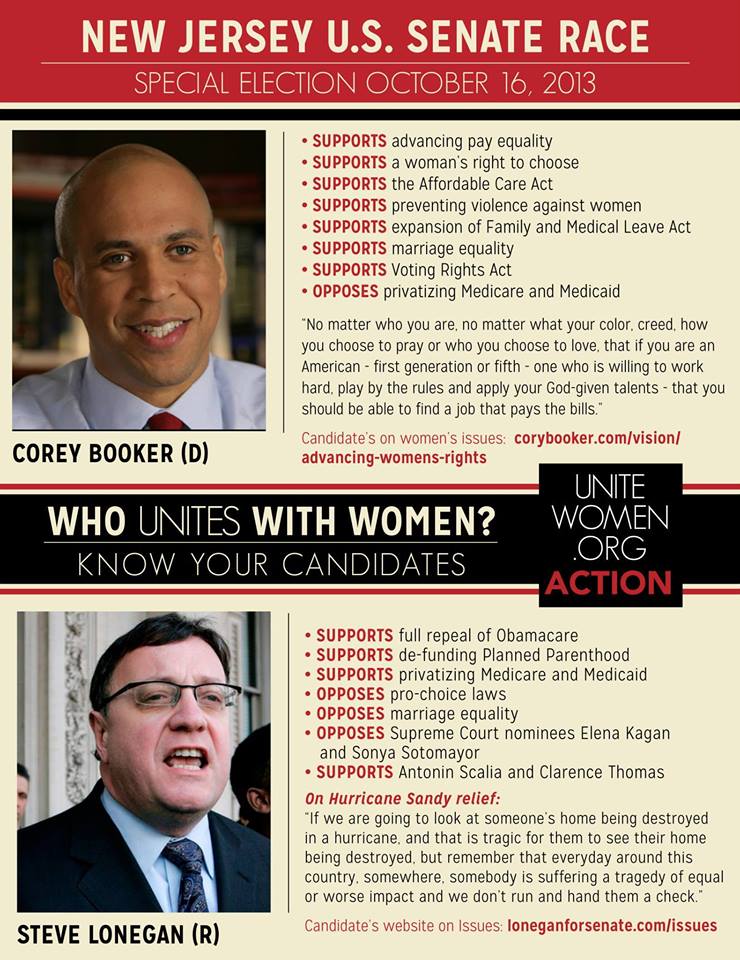 This Fall’s elections provide New Jersey women with an unprecedented opportunity to vote in their own (and their families’) self-interest, and to send a message to the nation.While most of the rest of the country awaits the 2014 mid-terms and looks on, New Jersey will hold elections for both US Senator (10/16/2013) & Governor (11/5/2013). In both races we have a clear-cut choice between supporting women & their families – or of endorsing the current right-wing agenda that is trying to turn back the clock on gender equality and to sabotage our children’s education and further inhibit economic opportunity for the middle class.

In the NJ Senate race to fill Frank Lautenberg’s seat, we have Newark Mayor Cory Booker (D) vs. Steve Lonegan (R), former mayor of Bogata, NJ and former State Director of the New Jersey chapter of Americans for Prosperity (the Koch Brothers Super PAC). Lautenberg, by the way, was a champion for women’s rights and the middle class. 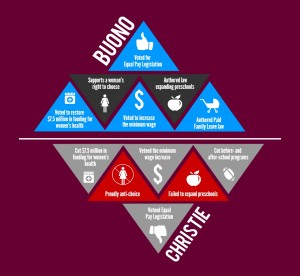 What may be even more of a concern is that if Christie retains his Governorship and, as is expected, chooses to run for President in 2016 – he is bound to woo the Tea Party Right for the primaries. Can NJ afford 3 years of a Governor in the mold of Scott Walker, Rick Scott, Rick Snyder, Tom Corbett, John Kasich and Bob McDonnell? Consider the repercussions for women, mothers, children, Dreamers, Labor, infrastructure and the environment!

Let’s take a look at the issues most at stake for NJ women:

Healthcare – Women have higher medical expenses than men and insurers often practice gender rating to charge women more than men. Preventative care (like contraception & screenings) are particularly important for women. Then, of course, our children’s healthcare is paramount.  The Affordable Care Act addresses all of these issues, plus no one can be denied for pre-existing conditions & parents can keep their children on their health plans to age 26.

Planned Parenthood – This organization provides affordable medical services for women who couldn’t otherwise afford them or have access to them: screenings, counselling and contraception (which averts far more abortions than the organization performs).

Protecting a women’s Right to Choose

Equal Pay: NJ women earn about 78 cents on the dollar for doing the same works as men.

So, the moral to this article is that it is essential that Jersey Women get out and vote in both elections – and encourage others to do the same. The Women’s Vote in NJ can change these elections and set the tone for the rest of the nation in 2014 & 2016.

This is just my view of the elections (but I’m guessing most of you will agree).  UniteWomen.org ACTION also encourages its members to research the candidates and the issues for yourselves. Go to the candidates’ websites and keep up with the News, but don’t let name recognition, Special Interest SuperPAC ads, campaign $s or media slant keep you from voting in your and your family’s best interests! 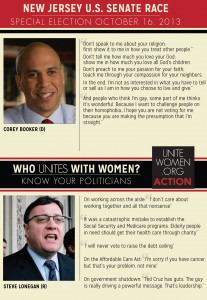