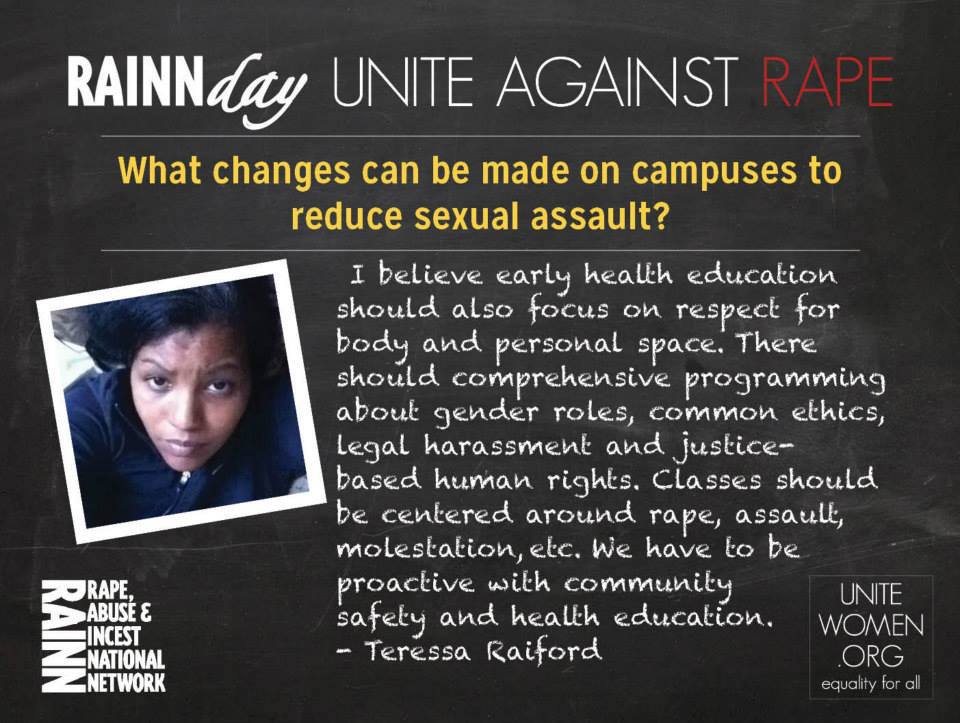 UNITEWOMEN.ORG and RAINN would like to be able to say, “Yes!”

“Isn’t it a given that everyone hates rape?” is something we hear quite often when inviting people to submit a statement for UniteWomen.org’s Unite Against Rape campaign.  Tragically, this question is not as rhetorical as it would seem.  A significant portion of our population is either unaware of, or indifferent to, the increasing prevalence of sexual assault in our society.

Thankfully, there are many organizations worldwide working in tandem to combat sexual violence.  Most of these advocacy and awareness organizations work independently – but from time to time our work intersects.

One type of graphic we create for Unite Against Rape cites statistics about sexual assault, many of which are provided by RAINN – the Rape, Abuse and Incest National Network, one of the top charities in the country.  RAINN created and operates the National Sexual Assault Hotline (by phone at 1–800-656-HOPE and online at https://ohl.rainn.org/online), and they manage many national programs dedicated to the prevention of sexual violence, bringing rapists to justice and improving victim services.

We decided to contact the President and Founder of RAINN, Scott Berkowitz, to invite him to participate in the Unite Against Rape campaign by submitting a photo and quote for a graphic.  He responded within a matter of hours with a resounding, “Yes!” and connected me with RAINN’s Vice President for Communications, Katherine Hull, to facilitate the process. 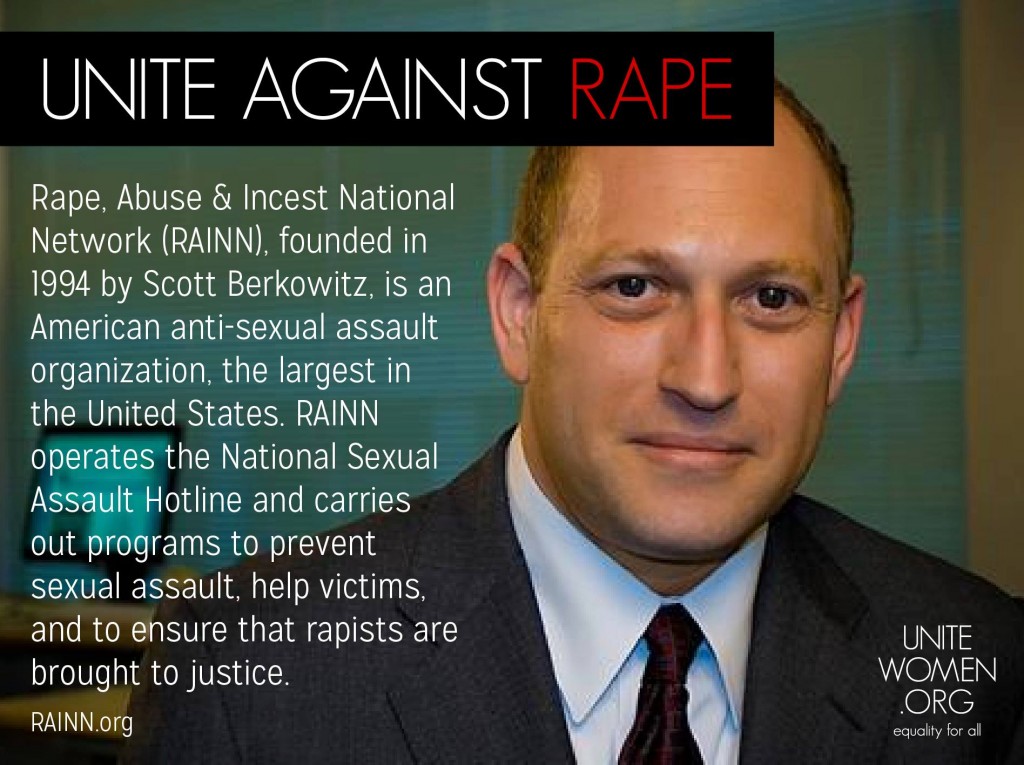 Several weeks later, UniteWomen.org was a partnering organization for the 50th Anniversary of the March on Washington, and Karen Teegarden (President and Founder of UniteWomen.org) traveled to Washington, DC for the event. She stayed through the weekend, and we scheduled several meetings together on the Monday following the march, one of which was with Scott and Katherine at RAINN.  With RAINN’s immense victim services network and our extensive social media reach, we both thought it made sense to talk about how we could collaborate and be mutually supportive.

We discussed RAINN Day, RAINN’s annual day of action that is dedicated to increasing awareness of sexual assault on college campuses and resources for survivors. On this day every year, students, faculty, organizations and administrators all over the country host individual events on campuses, creatively thinking of original ways to raise awareness of sexual violence, and resources for victims, at their school.

Those of us who work in the field of human rights are relatively well-versed in terms and statistics, but I was shocked to learn that so many young people do not know the legal definition of rape.  Educating students about what constitutes rape, and the consequences and effects thereof, is of paramount importance.  Many perpetrators are not even aware (or willing to admit to themselves) that they are rapists.

One of the main goals of our Unite Against Rape campaign, in addition to eradicating the shaming and blaming of rape victims, is to raise awareness of rape culture in every demographic.  We share this common goal with RAINN, so we decided that our first collaboration would be to cross-promote our similarly-goaled campaigns. We promoted RAINN Day leading up to the date (September 26), and on RAINN Day we posted a meme asking the question, “What changes can be made on campuses to reduce sexual assault?”   Answers could be sent to UniteWomen.org and would be part of a special RAINN Day series of Unite Against Rape graphics.  Suggestions started rolling in immediately, and we quickly g ot to work creating the RAINN Day series of graphics.  Several weeks later, we are still receiving submissions, and we are honored to be able to continue to spread the message of RAINN Day.

Many celebrities, journalists, activists and legislators have participated in our Unite Against Rape campaign, but the most important participation is that of everyday women and men.  We want to give a voice to rape survivors who want to shed the shame they feel by telling their story in a public forum – and to give a voice to supporters who want to express that support publicly.

Unite Against Rape is an ongoing campaign, and we welcome submissions at any time.  We welcome participation from everyone, male and female, of all ages.  If you would like to participate in the Unite Against Rape campaign, either the RAINN Day series or our original series of graphics, please send your thoughts, ideas and solutions to awareness@unitewomen.org.  Include your full name, and indicate whether you would like your name or initials used on the graphic.  Also, if you would like your photo included, please send a high-resolution photo of yourself.  All of the graphics that have been released so far as part of our Unite Against Rape campaign can be found in the following Facebook album

Shannon Fisher is the Vice President of Outreach and Public Relations for UniteWomen.org and the Director of our Unite Against Rape campaign. She was named one of the “People of the Year” in 2012 by Style Magazine in Richmond, Virginia for her activism in women’s rights. She received a B.A. from The College of William and Mary and is a graduate of the Political Leaders Program at the Sorensen Institute for Political Leadership at The University of Virginia. Twitter Handle: @FisherShannon