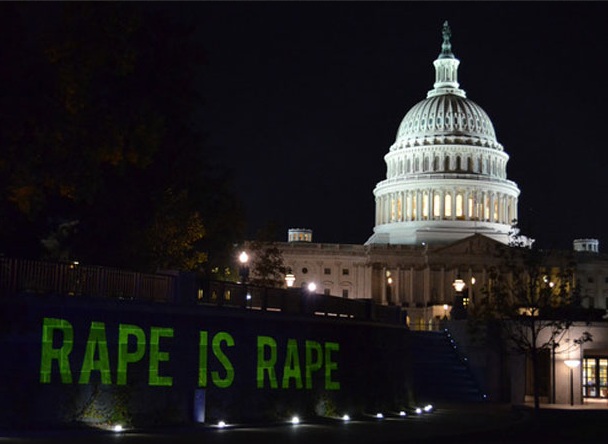 Last week, another white male Republican congressman stuck his foot in his mouth a la Todd “Legitimate Rape” Akin. Rep. Joe Walsh (R – IL), who already has lady problems in the form of $100,000 in unpaid child support, caused quite a furor when he said that it is never necessary to perform an abortion to save a woman’s life, because of advances in technology. When reporters asked him if he was saying he doesn’t believe in exceptions in abortion laws to save the life of the mother, he replied, “Absolutely.”

And so the conversation begins again. Democrats and Republicans, pro-choice and anti-choice commentators, news pundits and everyone else will go back and forth about what ‘reasonable’ people should include as exceptions in laws restricting access to abortion.

I have an idea. How about we stop talking about it? How about, instead of arguing the finer points of restricting women’s access to a basic medical procedure, we take up the offensive, and accept no exceptions in allowing women to make their own health care decisions?

You see, when we start arguing over this exception, or that, what we’re doing is saying that those seeking to restrict abortion access have ground to stand on. We’re ceding the war in favor of winning a single battle. The problem is, they don’t have any ground to stand on. Those who seek to limit access to abortions are wrong, and their policies are bad for women. So why are we arguing about exceptions to the law, when the whole law is bad?

The fact of the matter is that women do not stop having abortions when abortions are illegal. This was reported by the World Health Organization, which found that, in areas where access to abortion is restricted, women did not stop having abortions, but instead opted to seek help from risky, untrained practitioners, or self-abort. Both of these are dangerous, and result in women dying. The meme of ‘back alley abortionists’ is not just something feminists spout off to scare people. It’s a real threat, and making abortions illegal will have a very real, tangible result in the form of women dying.

I grew up in a very anti-choice household. Surprisingly, I understand my mother’s feelings about abortions, because I know her story, and I know she struggled with infertility. She and my father adopted my brother and me as a result of that struggle. When explaining to her why my views on abortion had changed, and further, why I was actively campaigning to keep abortion legal in my home state of Louisiana, I explained to her that I don’t like abortion. No one does. But the way to stop abortion is not to make it illegal, because that won’t stop it. Anti-choice activists often cite instances of women dying as a result of abortions, and claim they are just concerned for women. While I’m sure that there are instances of malpractice by abortion doctors (as there are in every field of medicine), these arguments don’t hold water. Anyone concerned about women would look at the statistics and agree that making abortion illegal will harm far more women. Instead, I told her, the solution to stopping abortion is better sex education, easy access to birth control, and a shift in the attitude towards sex in this country. Surprisingly, she agreed with me. She’s still resolutely anti-choice, but I’d like to think that I actually made her think a bit, and that’s always the first step in changing minds.

So back to those pesky exception arguments. It’s so tempting to get into them, because it’s easy to think that if you can just find one bit of common ground with someone who is resolutely anti-choice, then maybe you can get them to think about their entire position. I know this all too well. I’ve tried it several times, though, and it never works. In fact, it has the opposite affect of making you look defensive, and suggesting that the person you are arguing with is partially right. This is partially how we’ve ended up where we are now. We spend so much time arguing about the exceptions, while protections the women who don’t fall into those exceptions are eroded away more and more every year.

So instead of arguing about exceptions, let’s throw the anti-choice argument right back in the face of those who are making it. If they’re so worried about women, they need to put up or shut up. Want to keep women safe from harm? Keep abortion a safe, legal, regulated procedure. Institute comprehensive sex education in schools, and provide easy access to contraceptives for anyone who wants to use them. We have real-world proof that this works, including, ironically enough, a study from Massachusetts which shows that Romneycare (the law signed by Mitt Romney, which was the model for Obamacare, and which made contraception readily available to women in that state) reduced the abortion rate in Massachusetts.

Having to get an abortion is not a good thing. It’s a hard decision for any woman who finds herself having to make it. Anti-choice groups often refer to those of us who are pro-choice as ‘pro-abortion,’ but that could not be further from the truth. No one likes abortion, and I for one would love to see a day where abortions are not needed except in cases of rape, incest or the life of the mother. And I believe that day can come. However, making something illegal doesn’t reduce the need for it. In the case of abortion, there are very clear steps we can take to reduce the need, but we have to stop arguing about exceptions, and start having a real conversation about things that will actually make a difference.