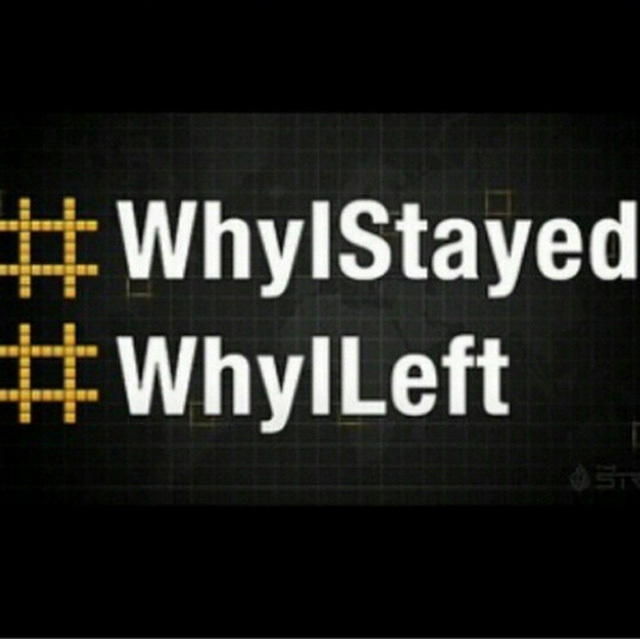 It started as a push in the heat of an argument. To this day I don’t remember what the argument was about. He apologized immediately and all was forgiven. I had no idea that over the next year things would escalate. How could this happen to me?

It was such a gradual process. Day-to-day life was for the most part normal…at first. By the time I realized he was an abuser it was too late – I was already married to him. I’m not a stupid woman. I came from a good family. I never saw violence of any sort in my family. My parents loved each other dearly and while they had an occasional argument there was never a hand raised.

My story is not unique or unlike countless others. Like I said it started with a push during an argument. A push that was forceful enough to knock me onto the bed, but still in my mind it was a push. It was not an everyday occurrence and only happened initially when arguing. Now I could get pretty loud and ugly during an argument and had no problem standing my ground. I was tough, strong, and fiercely independent. I had a mind of my own and prided myself on not taking shit from anyone.

I do not remember when the first hit happened, I only remember a collage of memories that lasted over a couple of years. Each incident becoming more violent than the previous. A few stand out in my memory – the grabbing of my hair and being drug across the living floor or the time I was taking clothes out of the dryer, kneeling on the floor and my hair and head grabbed from behind and then banged against the dryer several times, after I said something he didn’t like. I remember the time in the kitchen when cooking dinner one evening and from out of nowhere having my head slammed  repeatedly against the cabinet door. These were not incidents that happened every day so it couldn’t be domestic violence, or so I rationalized in my mind.

I do remember the first time I realized that it was domestic abuse and I feared for my life. Again, the argument that escalated into the attack I don’t recall but the shattering of the glass coffee table and him on top of me with a piece of glass to my throat I do. “If you ever leave me I will kill you, your kids, and your family.” That would not be the first time I would hear those words. I knew then that no matter what, I had to get out and get out soon. The violence continued and then the raping started. Saying no to him did not stop him from raping me multiple times in a week. The night before my escape I slept with a gun that my friend’s husband gave me under my pillow, because I had decided if he reached for me one more time I would shoot. My life had become a life I no longer recognized. This was not the life I had ever imagined.

The abuse didn’t happen when my children were around, it didn’t happen when anyone was around. The marks that he left were never visible with the exception of the bruises on my forehead I kept hidden with makeup and my bangs. I didn’t tell anyone for the longest time. I was so ashamed that I had become “one of those women.” I had held this belief somewhere inside me that I would NEVER allow a man to hit me when I had heard stories of  “those other women.” How could a woman let a man do that to her? How could she be so weak? Followed by “ I would never…” or “I would kill him.”

What I didn’t know was how many times abusers groom their victims. Much like a sexual predator grooms their victim. Many abusers are charming, and the life of the party, to the public. I had been groomed and didn’t even know it, BUT now I knew.

I finally confided in a friend and told her my plan to get out. I slowly started bagging clothes and belongings and storing them at her house for THE DAY. I had to be careful not to remove too much from the house or he would notice. When the opportunity would present itself I would leave. The day finally came. He was going to be in another state working. This was my chance. I was in school at the time and had to confide in one more person, a teacher, what was happening. I was going to have to miss school and I had to set my shame aside and tell her the situation. I still remember her words “Do it. Do it now. I did it and you can too.

I did get out. It was long and hard. The emotional ups and downs and confusion took a while to process. I got a restraining order with legal help from the local women’s shelter and eventually he ended up in prison for other reasons. I went through numerous moves but he would still find out where I lived. The danger he posed was real, but the police came every time I called. I think though, if he had not been involved with other criminal activities, I would not have had support from the police. I was luckier than most.

When I look back on that time in my life now, it is like I am looking at the life of someone else. When I share my story with other women who have been in the same situation, they are shocked because they see me as such a strong person, they cannot imagine this was once a part of my life.

I still know I am lucky, and not a day goes by that I am not grateful I was able to get out and still here to talk about it. So many are not. While it is a complicated and difficult thing to do, I encourage women and men in the same situation, to take that first step and confide in someone. Talk to someone. Make a plan. Even if you leave with only the clothes on your back – do it. I know not everyone has the financial means to leave and there is judgement from many. The issue is a complex one and not always as easy as “just leaving.” I do know this though – if you don’t leave, one day you will be in one of two places – the ground or jail.

If you have  a friend or loved one in this situation, please do not judge or give up. Do not become frustrated because they go back. Continue to support them and help them in any way you can. Do not be one of those people who say “I would never…”

I do not write this anonymously out of shame, but because he is still out there and no longer in prison.

Tags: domestic violence, sexual abuse, Unite Against Rape, UniteWomen.org, Why I left, Why I stayed